Blu-ray ripper is a tool invented to rip and copy the video content from a Blu-ray Disc/Folder for saving outside to a local folder on any device. After getting the videos out of the Blu-ray Disc/Folder, the playback can be more convenient. Why? The direct reason refers to that Blu-ray content needs to be played using a Blu-ray Driver or Blu-ray player. This limitation makes many people fail to watch Blu-ray videos casually. 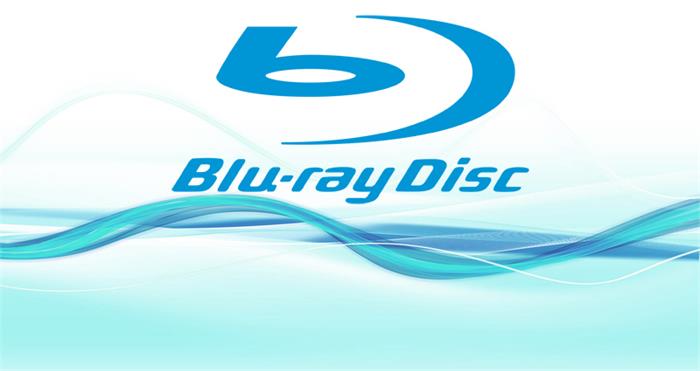 Q1. What is Blu-ray Ripper?

Blu-ray Ripper is a professional and all-in-one Blu-ray Disc/Folder ripper, which can help users to rip and convert the Blu-ray content to MP4, MKV, MOV, FLV, M4V, MP3, AAC, OGG, WAV, M4A, and other popular formats as a backup. There are over 300 formats are supported by Blu-ray Ripper. To help users easily access them, it classifies the formats according to the devices such as iPhone, iPad, Sony, Motorora, Samsung, etc. There is also a search function set in the format selection menu, so users easily find the format they need from the multiple choices.

Not only a professional program, Blu-ray Ripper can work quickly as well. There are multi-threading, multi-core and GPU acceleration technology applied in the program, which all help to maintain the quick performance of the program. Rather than the conversion speed, the loading speed, and other in-app operations are also fluent and stable. So people can really have a good ripping process using Blu-ray Ripper.

At the same time, there are many other toolkit users can use to adjust their Blu-ray content. For example, the parameter settings, by using which users can change the resolution, aspect ration, bitrate, frame rate, video encoder, audio channels, sample rate, audio encoder, etc. of the Blu-ray videos they are going to rip.

Furthermore, Blu-ray Ripper also provides video editing functions, including the basic editing functions such as Trim/Crop/Rotate, Brightness/Contrast/Saturation adjustment. In addition, other effects such as subtitle/audio tracks/3D effects can also be added into the Blu-ray videos using Blu-ray Ripper. This is really a comprehensive Blu-ray ripper we have ever met.

In order to suit most users' needs, Blu-ray Ripper provides both a free-trail version and a paid registered one. For most basic users, the free trial is completely enough for using. If you want to go any further and rip the Blu-ray content more professionally, the full version can also meet your requirements.

Q3. What are the Differences Between Free Version and Registered Version?

There are exact differences between the free version and the registered Blu-ray Ripper.

The limitations of the free Blu-ray Ripper are concluded as the following:

If you purchase the register version of Blu-ray Ripper, the limitations stated above would all be removed, so you can enjoy the program with:

Q4. How Can I Register Blu-ray Ripper?

If you need to purchase and register Blu-ray Ripper full version, these steps are required to be followed.

STEP 1. First, you need to go to the official Blu-ray Ripper product page purchase license code of it. Click on the "Purchase" button and you will be navigated to the online store to finish the payment. You need to enter your email while purchasing, and you will get the license code after payment is done successfully.

STEP 2. After checking your email and getting the license code, now please open Blu-ray Ripper on your computer. A register window would pop up as you enter the interface.

STEP 3. Now, you should enter the email you used to purchase Blu-ray Ripper, and copy the license code from your email then enter to the register window as well. Then hit "Register" and you can start to use the register Blu-ray Ripper. 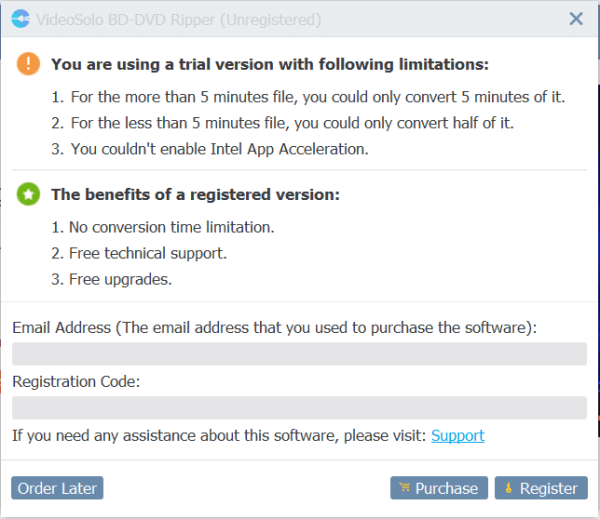 Now, also give a minute to see how you can rip the Blu-ray Disc to MP4, MKV, AVI and other popular media formats on your Windows/Mac using Blu-ray Ripper.

STEP 2. Edit the Blu-ray Content
After loading the Blu-ray Disc content to Blu-ray Ripper, you can edit it using the video editing tools provided by Blu-ray Ripper. As you can see on the toolbar, the "Clip", "3D", "Edit" functions are all free to use.
STEP 3. Choose Output Format
Now you can move to select an output format for saving the output Blu-ray video. You can find the "Profile" section, where has 300+ output formats for free selection. Beside the selection menu, you can make more advanced video/audio settings by clicking "Settings", for example, the resolution, ration, bitrate, frame rate, video encoder, etc. can be adjusted here.

STEP 4. Rip the Blu-ray Disc
You can also choose an output folder for saving output content ripped from the Blu-ray Disc on your computer to a certain folder. When all the settings are made, you only need to easily hit the "Convert" icon to start ripping. Wait for a moment and you can get the Blu-ray content with your desired format.

If you only want to rip a Blu-ray Folder to other formats on your computer, the process is just quite similar as the above. Let's also have a look together.

STEP 1. Load Blu-ray Folder
Open Blu-ray Ripper on your computer. After entering its interface, go to "Load Disc" option in the top left corner. After pulling down the menu, you will get multiple selections, just choose "Load BD Folder" and load the Blu-ray folder to Blu-ray Ripper.

STEP 2. Edit the Blu-ray Content
If you are not satisfied with the quality or effects of the Blu-ray videos in the Blu-ray Folder, you can use the free editing tools such as "Clip", "3D", and "Edit" provided in Blu-ray Ripper to optimize the videos.
STEP 3. Choose Output Format
Then in "Profile" where you can select an output format for storing the Blu-ray videos as you like. There are 300+ formats you can free select here. And also, you can directly choose the devices you want to play the content on.

Till now, you have grasped a comprehensive understanding of Blu-ray Ripper. I look forward your first ripping process with out amazing program! Go and have a try now!